The origin of the Roman city

The town is likely to have originated in connection with the foundation of the via Postumia, from Genoa to Aquileia (province of Udine), in 148 BC. Probably, however, the measures taken in 89 BC, through which the local people were awarded the Latin citizenship, determined the real start of the urbanization process. Already at the beginning of the imperial age, a change took place in the commercial strategy, resulting from the foundation of the Aemilia Scauri and Iulia Augusta Ways.
These roads affected directly the territory of western Liguria (Vada, i.e. Vado Ligure, province of Savona), driving to a progressive decline and abandonment of the site. The rediscovery of the town took place when the Turin-Genoa “Royal way” was opened (1820-1825) and the Genoa-Novi-Turin (1850-1852) and Genoa-Milan (1912) railway lines were built. Only in 1924, given the protective restrictions safeguarding the archaeological heritage, the destruction stopped and intervention began to consolidate and restore the monuments.

As far as the general layout of the urban plan is concerned, the experience of the Roman colonies is here applied with two of the three major components of a town: the network of the roads crossing at right angles and the forum in a central position; the presence of walls is uncertain.
Interesting criteria were adopted in the urban planning, which nowadays might be referred to as the “zoning concept”, that is the distribution of areas according to their specific function. Indeed, besides the major services concentrated in the forum, spaces and buildings destined to amusement and leisure time – such as theatre, baths, and amphitheatre – were located in the north-eastern sector of the town within a coordinated and functional system. The almost square blocks of the residential areas were arranged with an exemplary clear design. 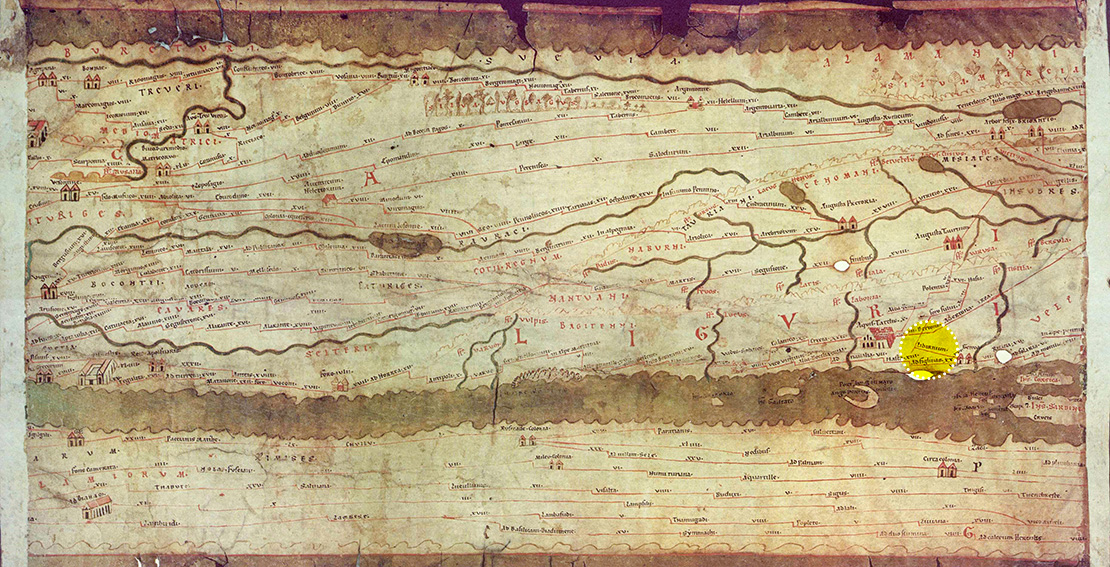 Copy of XII-XIII century an ancient Roman map that showed the military roads of the Empire. Libarna is highlighted.